The ferry goes 5:15 in the morning. Dimitra drives me to the port. She's from Bulgaria. The ferry is already there.

Astypalea is wild, interesting and difficult to navigate.
For start I sleep a bit and then start to read Zweig. His page-long sentences remind me of Thomas Mann but are easier to follow. He sometimes uses past perfect without auxiliary verb.
It appears that I have had books with me in five languages. Although the criteria were only paperback and fiction have all the books formed an interesting symbiosis. Two from twelve are still untouched (but I had already started to read two books at home).
On Paros begins fight for seats in the café. Those who arrived when it was still dark have a certain advantage. The bustle intensifies and I move one floor up to a half-outside café. More light and air. There are still only a few people but this doesn't last long.
In Piraeus the crowd carries me to the place where I arrived in the dark a few weeks ago and from where the metro goes towards the capital. Two stops before the airport I have to go out and exactly in front of the metro station is the bus stop. One of the closest places to the airport for sleeping is Artemida.
The accommodation has no signs anywhere and Google thinks it is in the neighbouring block. I locate the house by number and ask from a pharmacy next door if there is an accommodation like that. The pharmacist takes a notebook, phones and says that a person is here. Looks like this doesn't happen for the first time. A woman with the key and a boy arrives. It turns out to be an ordinary two-room apartment.
At the beach there are a row of closed restaurants, electric blue water and pink mountains. Using smell as a guide I find two burger and pizza places. Both are empty and not cosy. Luckily the pizza can be taken away.
Timetable says that I will not have time for beer tomorrow in either airport and must arrive home sober. 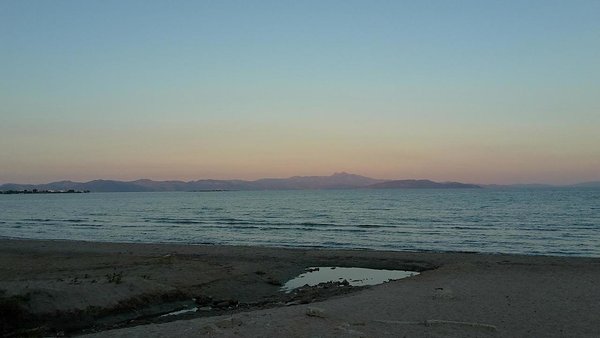 Previous
one more day
Next
at home