Faroe Islands. Population 50 000, sheep population 70 000. 18 islands.
According to genetic research men originate from Norway and women from Ireland and Scotland. First traces of habitation from 4th century when the much talked of Irish monks didn’t exist yet. The language is same kind of time bubble as is Icelandic that results in Icelanders and Faroese understanding old weird English dialects than the English don’t understand themselves. To my ear Faroese sounds like an Icelander had been to dentist and tries to speak something with his tongue still stiff, swallowing some of the letters. Written text is pretty easy to understand based on Icelandic but one has to be a bit careful with that. As in Estonian and Finnish so also in Icelandic and Faroese one word might mean different things in both of the languages. For example Faroese “valid member” sounds as “thick dick” for an Icelander.
I share the cabin with Sara who comes from Slovenia, was volunteering in Iceland for five months and intends to stay now on the Faroe Islands for a week on her way back home.
The ferry creaks, rumbles, jumps up and down and swings from side to side. Reminds me of more memorable moments onboard Aurora and Arktika but this here is not a sailboat for 12 people. A good book is essential to divert attention. This happens to be Aili Helm’s book “The devil has no shadow”. Quote: “…thinking presents big difficulties even for a grown-up Russian and that young people might think out something or act on themselves, this is in their opinion not possible at all.” Looks like “the Russian” could be replaced with any species of grown-up portrayed by the media.
In the morning the sea is calmer and tight white fog surrounds the ferry. For a moment a sharp triangle rock appears above and disappears again. Then a row of jagged mountains comes visible next to the window and thick white carpet lies on the water. Later the blanket rises so that everyone could observe the lower part of the island. Finally all of the cloud vanishes and I’m greeted by a flock of green islands under a blue sky. I move into Klaksvík, the second biggest town in the Faroe Islands. 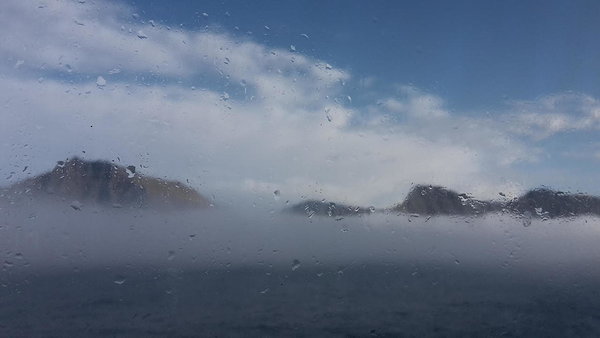 Next
a walk to Múli