In the morning I have a faint feeling of hearing high water siren in the night. Probably a dream. But is has rained.
Then I oped the door and step into water. So it wasn't a dream. Luckily I have good boots. The line between land and water is now even more hazy than on other days. Boardwalks have been built near the lagoon and the Japanese reflect nicely in water. Vaporetto stop is higher than usual and elderly people have trouble getting in. The locals have a nice habit to read a book while waiting for the vaporetto and riding it.
I have to go to the rental company to pay 5,25 euros tourist tax. Italian efficiency, one hour vaporetto ride and half an hour waiting.
Since water is out of the sea it makes sense to go to firm land, Dorsoduro.
Rabbit picking scenes on the wall of I Carmini church. San Sebastiano church full of Veronese. San Nicolo dei Mendicoli church is noteworthy because it was meant for poorer people. No other churches like that anymore in Venice. Sadly the door has been locked fifteen minutes ago. So I peak into gardens and find more nice squares. One only has to be careful not to get too close to Academia where there are T-shirts, hats, masks and black beggars. The latter were not here two years ago.
Dorsoduro also has one of four still operating gondola workshops.
Lunch. You pick a suitable amount of tiny sandwiches and wash these down with prosecco. Less than ten euros and good mood is guaranteed. The world looks more pink afterwards.
Modern art in Punta della Dogana. I've seen some of it before, white painting on white background. There's also a credible picture of Tallinn City Planning Department.
Wet snow or something outside. Santa Maria delle Salute church is open and supposed to heal its visitors.
Meanwhile water has gone back into canals and the Japanese climbed down from the boardwalks.
I go to wash my hair before the concert in the evening. Since I have no better clothes it seems reasonable to be at least washed. Interpreti Veneziani  and Vivaldi. Music that was born here so no wonder it sounds like sun reflecting from the water on the wall. After the concert most of the people have disappeared from the streets. Houses stand alone in front of dark sky and make me feel like I was left wandering alone in a theater after the play has finished. 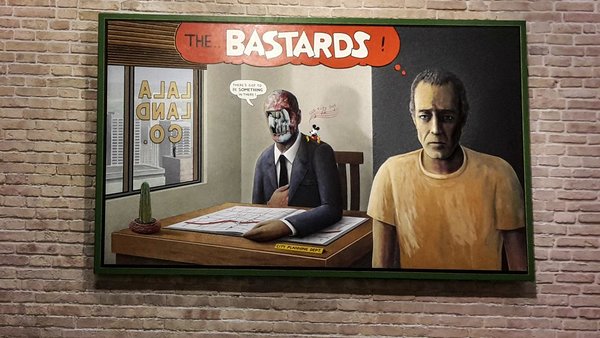