In the night comes revenge for inept choice of camping spot.
I took the most beautiful one although I did look at another place thinking it’s less windy. But probably more mosquitoes. Wind gets stronger and stronger during the night. At exactly half past four the tent flies away. It takes a bit time to entangle myself from sleeping bag and mosquito net. Try to rearrange the tent but with such a wind the tent pegs have no holding in this thin soil. At exactly five the tent is up in the other spot and all things where they are supposed to be. Also the two pegs that I thought have flown away. No wind here. It starts raining now. Good timing. Nightingales, common chaffinches and a starling have already moved and sing undisturbed.
Morning is cloudy but more and more blue patches appear. I get up late and take my time because the ferry to Saaremaa goes either at half past three or at five. Two German-speaking people arrive who have lost Sääretirp.
Take some pictures in Orjaku harbor and watch two Newzealanders maneuvre out of the harbor.
I thought it would be easy going on the islands but this constant battle with the wind is harder than the uphill climbs of Southern Estonia. Jacket has to be put on and removed all the time as well. All the time I understand less the people who want to live right besides big water.
Cottage cheese snack in front of Emmaste shop. When it’s too chilly for ice-cream.
At Sõru harbor there are two German cyclists who tour all over Estonia and are thrilled of the chance to speak German. The ferry still goes half past three.
Now I leave Hiiumaa for a while and continue with Saaremaa. Saaremaa differs from previous places because big water will be on the right.
It is not too chilly in front of Leisi shop. Eastern side of Pammana peninsula is full of campsites. Wind is better here on Saaremaa or maybe it’s just that the road goes through forest.
Through Soela, Pammana and Murika to Tuhkana. Wondering if I should check out Pakulaid is resolved by finding out that I’ve missed the turn. Maybe I’m tired, maybe it’s just already late and the thought of reading in the sun in the campsite feels too inviting. The campsite is nice after I’ve pushed the bike through sand with some cursing. Even tent pegs stay quite well in the sand. I take a dip in the sea. Empty sandy beach on both sides. Finish the book and take a walk on the beach, catching last rays of the sun. Wind has died down. Now it’s just cool and beautiful.
Cycling 54 km. 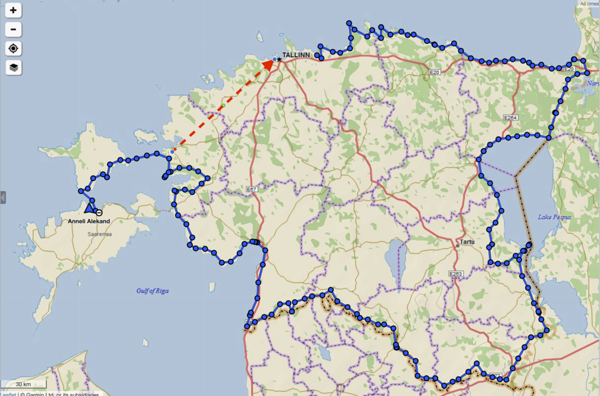