We used a sunny Sunday to walk from Kloogaranna to Paldiski.
It is an about 20 km long trail that follows the European coastal trail and is fairly well signposted. Anyway, there is no real risk of getting lost, considering that you have to keep the sea always to your right.
We used the option to cycle to the train station, leave the bicycles there and go to Kloogaranna by train. There's only one train daily that goes there while most trains stop only in Klooga which is 3,6 km away. There are also two bus lines stopping one kilometer from Kloogaranna (Treppoja rist) but either of these runs on Sundays. So we didn't get there very early but around 10 o'clock.
Sun was shining, birds were singing and we started to take pictures. The beach is nice as is the landscape inland, consisting either of pine forest or the Baltic Klint which is a quite impressive limestone escarpment. Well, limestone is not the only ingredient there and someone interested in geology will probably find the whole thing looking like some kind of study material. The rock pieces that have fallen down, contain cool fossils. Besides, due to it being mid-April, we had really beautiful ice formations lining some of the escarpment. Taking it all in we finally understood why it said in the booklet that it takes seven hours to walk the trail. It took us almost nine.
Of course, we also had a picnic and collected some seashells and listened to birds, checked out the many waterfalls going down the cliff and just took it all in.
Finally, Paldiski is a worthwhile destination in itself, being a former closed top-secret place during the Soviet times. There are three old churches and some other nice and a lot of ugly architecture. Trains and buses back to Tallinn are rather frequent. 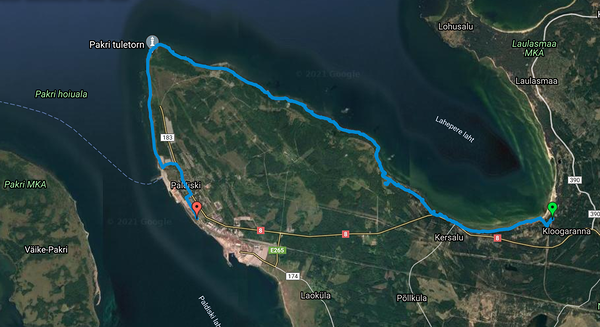