We get to sleep longer today and that means until quarter past seven.
We also move to another hotel that is 40 minutes closer to tomorrow's destinations. Patches of snow surronded with mountains. The tops of mountains have been cut off. At times only the upper tips of horse fences are visible from the snow. Or maybe they have such tiny horses up here in the North.
During the past weeks an unprecedented heat wave has crossed over Iceland so most of the snow has melted. That cancelled our planned ice cave visit and glacier walk in the South.
There are some trees. Small and miserable but still. Most of the trees are planted so that wind and water could not take the soil away. Horses and sheep would then starve. And potatoes would not grow. Presumed they grow these here on the spot. I guess that a big part of the vegetables are imported. Here are greenhouses heated with natural hot water but these are not enough to feed the whole population and the hordes of tourists. The description of Icelandic cuisine is similar to the Estonian one: anything you can kill with boiled potatoes. Served with potatoes, not killed with throwing potatoes at them.
First we drive to a secret place to look at a stone arc. No-one goes there and even locals don't know how to give directions. So we are not allowed to say where it is. Well, it's on the northern coast of Iceland. We are almost at the sea when the first car says that it's not possible to drive forward because the road is very muddy. We have to continue on foot. I'm prepared to have ankle-deep mud but the road is just a bit wet. Half-kilometer hike followed by a decent down to the beach still manage to create enough excitment. On the beach there's a troll who obviously has tried to escape for his life. Trolls turn into stone when they wander out in sunshine. All Iceland is full of careless petrified trolls because the sun continuously changes its rising time. We take pictures of the troll from one side and from the other side. Sun shines, practically no wind on this side of the beach. Nice to just sit on a rock. Across the bay are white mountains.
Next is sandwich and looking around in the harbor of Húsavík. I enjoy walking without the camera for a change. Modern phones make pictures as well. I only need to keep an eye on no-one noticing. The biggest target of criticism in the goup is aimed at selfies (especially when made with a selfie stick) and Chinese who pose standing on one foot. At the same time I haven't seen anywhere such a big concentration of people carrying big cameras and tripods as in Iceland. There's also a big concentration of Chinese with selfie sticks of course. There's a
big concentration of everything except Icelanders. The personnel in many places are immigrants and therefore not capable of talking Icelandic with me. So it would have made more sense to learn basic Polish, Romanian or Czech.
Weather is very hot. Obvously a serious case of global warming.
Back to the nature, a walk on lava landscape. A very short walk. Every eruption of a volcano produces some weird landscape. Until horizon all is strewn over with stones and this results in a strange park of sculptures. Very modern art. Iceland is a very unlogical-looking place as a result of this constant shaking and the landscape here is a total mess of randomly thrown around elements.
After lava comes thermal area. Next to the road is a lake filled with hot water. It steams there like our bog lakes in summer mornings. The earth around the lake also steams and air smells of rotten eggs. The sun picturesquely sets into the steam.
Dinner takes place in a big fancy hotel where we were supposed to have stayed. The booking that was made two years ago was cancelled due to a new booking out-of-season for six months for a film shooting. Daniella and Marsel are still very much pissed off because of this but I understand the hotel-keepers. Local news has been reporting the arrival of a lot of cars for the shooting. Myvatn has to personify a Siberian lake, maybe Baikal. It has to do with something called Fast and Furious. Taken the weather situation into account, they may soon be just furious. The ice where all the cars should race melts with cosmical speed.
Tomorrow again early wake-up in order to go photograph a waterfall from the other side. For transport super-jeeps and snow shoes. That creates of course again a lot of excitment. So the midnight aurora borealis watching is voted down but the forecast is not promising anyway although the sky is absolutely clear. 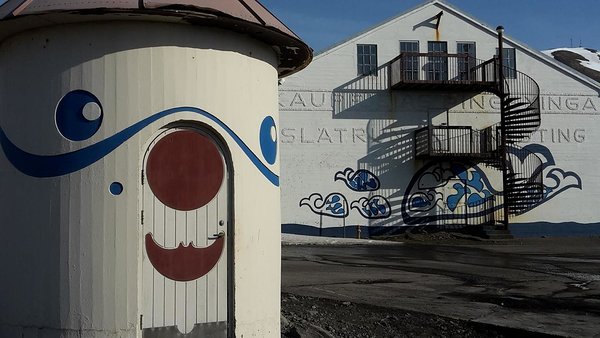 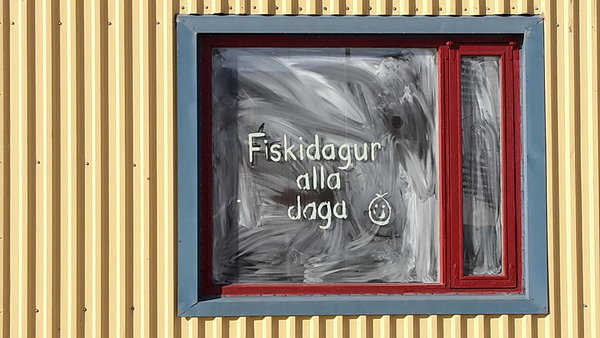 Previous
going North
Next
in the snow